Summary: There are some relationships so taboo they’re irresistible... After John and Mary break up when Sam is 11, Sam moves away with Mary and his new step-father while Dean stays in Kansas with John. Fast-forward 12 years and John is dead, Sam’s just returned from Europe, and Dean’s gone and married a billionaire and become a male model. As the boys reconnect, Sam becomes increasingly fascinated by this successful, happily-married version of the big brother he barely knows, a fascination that soon turns into an overwhelming mutual obsession. 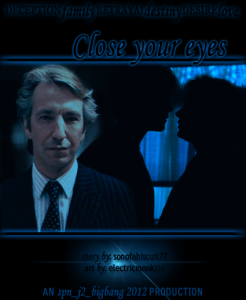 Author’s Notes: Many thanks to my wonderful beta

dear_tiger for her support and help with this story. Against her advice, I’ve kept to British spellings in this fic. I think I was feeling rebellious ;-) I did try very hard this year to write something that wasn’t an AU, but as you can see I failed miserably. However, I’ve wanted to write something based on the film “Close My Eyes” for a long time; it’s definitely worth watching if you enjoy incestuous love triangles or Alan Rickman. A trailer can be found: here!

I was lucky to be paired with the fantastic

electricmonk333 this year, and she has done some amazing art to go with this story. I've inserted it at various points in the fic, as well as devoting an entire interlude post to some of the amazing spreads she did. Head over to her art post to see everything she has produced. It's well worth it. Click here for awesome art post! Finally, thanks so much to the mods for planning and running this challenge again this year. I'm proud to be a part of it :D

Soundtrack is also available on Spotify here: Close Your Eyes